A few months ago when the weather was cooler, we went on a day trip to Bidar Fort and the Bahmani Tombs.

Bidar is a formidable 15th century fort. According to history there was an old fort at the site, which was captured by Prince Ulugh Khan in the 14th century, who later became Muhammad bin Tughlaq of Delhi (who we are of course familiar with). Later the fort became the capital of the Bahmani dynasty when they moved to Bidar from Gulbarga. The fort as we see it today, was built by the ruler of the Bahmanid dynasty Ahmad Shah Wali Bahman. Eventually Aurangzeb annexed it in the 17th century.

For us it was our first sojourn into the Deccan (as adults) and I was curious to see the color palettes and the foliage and the red stone of the Deccan. Here are some quick sketches made from memory.

One of the things I love about living in India is how we rub shoulders with centuries past. That was the charm of Delhi too, living in close quarters with everything that that had gone before at that very same place. Puts our lives in perspective I often think.

As always I’m wishing everyone a happy new year in Feb because that’s when it really hits me. Happens to you also I’m sure – so a very happy new year. Last year I had a great year and a great sketchbook, most of which I was too lazy to scan. So here goes.

I think it was October (?) that I happened to go to the book launch of Gandhi before India by Ram Guha.  Until the session began, I amused myself by drawing the people in the audience. If any of you reading this post go to book launches, please don’t stop – I love drawing faces of book lovers – a refreshing change from the blue line Delhi metro commuters.

and here are some insights from Mr Guha about writing biographies:

2. Look for sources that emanate from the person himself

3. One must flesh in the secondary characters 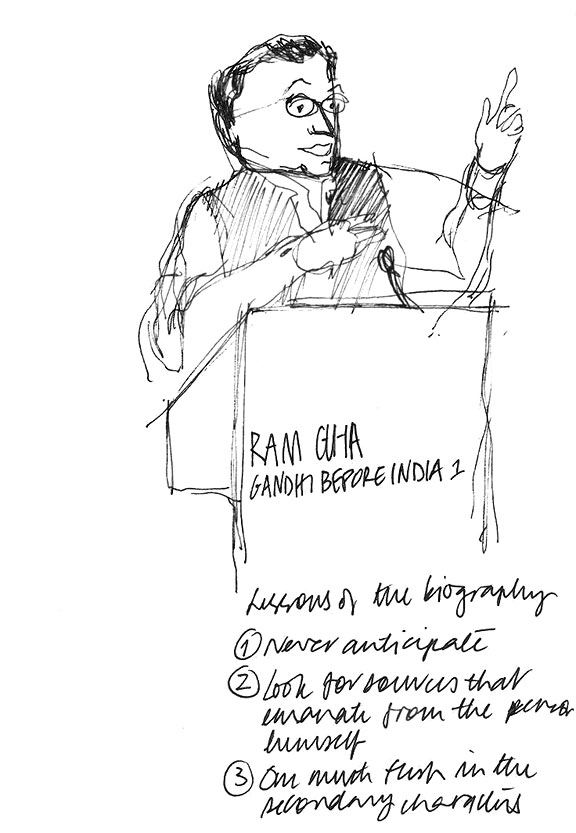